On The Freedom of A Christian 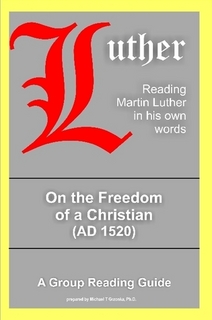 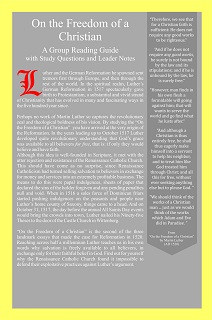 Luther and the German Reformation he spawned sent tremors first through Europe, and then through the rest of the world. In the spiritual realm, Luther’s German Reformation in 1517 spectacularly gave birth to Protestantism, a substantial and vivid strand of Christianity that has evolved in many and fascinating ways in the five hundred year since.

Perhaps no work of Martin Luther so captures the revolutionary zeal and theological boldness of his vision. By studying the “On the Freedom of a Christian” you have arrived at the very origin of the Reformation. In the years leading up to October 1517 Luther developed quite revolutionary understanding that God’s grace was available to all believers for free, that is: if only they would believe and have faith.
Although this idea is well-founded in Scripture, it met with the utter rejection and resistance of the Renaissance Catholic Church. This should have come as no surprise, since Renaissance Catholicism had turned selling salvation to believers in exchange for money and services into an extremely profitable business. The means to do this were papal indulgences, sheets of paper that declared the sins of the holder forgiven and any pending penalties null and void. When in 1516 a sales force of Dominican friars started pushing indulgences on the peasants and people near Luther’s home county of Saxony, things came to a head. And on October 31, 1517, the day before the annual All Saints Day events would bring the crowds into town, Luther nailed his Ninety-five Theses to the door of the Castle Church in Wittenberg.

“On the Freedom of a Christian” is the second of the three landmark essays that made the case for Reformation in 1520. Reaching across half a millennium Luther teaches us in his own words why salvation is freely available to all believers, in exchange only for their faithful belief in God. Find out for yourself why the Renaissance Catholic Church found it impossible to defend their exploitative practices against Luther’s argument.

See Freedom of a Christian – Table of Contents

Read Freedom of a Christian – Sample

Buy at a discount from our publisher LuLu.com, or wherever quality books are sold.